A history of gaining experience in D&D

A lot of ink has been spilled on the subject of murder hobos, whether they're the pinnacle of D&D play-as-it-really-happens, and what to do about it. Many OSR blogs point out (often correctly) that older editions downplayed the "kill" part of "kill stuff and take their loot" but when did the change happen?

Originally, D&D awarded XP for treasure gained and monsters defeated. The actual XP rewards were not included in the books, though an example of calculating XP for an encounter was:

Experience Points: Experience points are awarded to players by the referee with appropriate bonuses or penalties for prime requisite scores. As characters meet monsters in mortal combat and defeat them, and when they obtain various forms of treasure (money, gems, jewelry, magical items, etc.), they gain "experience". This adds to their experience point total, gradually moving them upwards through the levels. Gains in experience points will be relative; thus an 8th level Magic-User operating on the 5th dungeon level would be awarded 5/8 experience.

Though the actual rewards are never listed definitively (an ommission that would be repeated by the "Blue Book" Basic of 1977), we can infer some practices:

The first rule was contentious enough to require errata, but even groups playing under these rules would see a gradual shift in the primary source of XP as characters gained levels.

Low-level characters facing a typical group of low-level monsters, say a lair of kobolds, would earn XP primarily from slaying the monsters themselves, and a comparatively small amount of XP from the treasure obtained. A small (!) lair of 40 kobolds would yield around 200gp in treasure (140 from the 1d6-per-enemy, and around 60, with wide variance, from the level 1 lair treasure expected to appear in any room containing a monster). That's 4000xp from monsters and 200xp from treasure.

The incompleteness of the original D&D printing led to Gygax making drastic changes in the form of a supplemental pamphlet. In this, he and Kuntz address the XP system:

Guidelines for A warding Experience Points for Monster Slaying: (Addition)

The awarding of experience points is often a matter of discussion, for the referee must make subjective judgments. Rather than the (ridiculous) 100 points per level for slain monsters, use the table below, dividing experience equally among all characters in the party involved.

This change would be canonized in the rest of the Basic lineage, reprinted verbatim in the Blue book (1977) as well as influencing the AD&D rules. The table image above is from Expert, but the numbers remained largely unchanged throughout the Basic lineage.

Moldvay Basic (the first "Red Book", TSR2014) lists treasure as the first source of XP, and then reprints the XP-per-HD table, expanding the rules and procedures for awarding XP:

Mentzer Basic (the boxed "Red Book", TSR1011B) changed the rules in some small but significant ways:

Both Basic books continued the Prime Requisite bonus XP, but reduced it to 5-10% from the original 10-20%. Both books also codified rules that NPCs recieved half a share of both the treasure and XP for monsters.

Companion (TSR1013, 1984), added some adventure design guidelines that revealed some further design intent. First, On most adventures, XP gained from defeating monsters should be 1/5 of the total XP. Second, it made the first mention of "bonus XP", suggesting ad-hoc rewards for "completion of a goal (rescue, retrieving an item, etc.), special individual actions (heroic performance, exceptional or frequent use of special abilities), alignment play, or other aspects of the overall adventure." This wasn't a new idea - such bonuses had already been mentioned infrequently in published modules. For example:

Gazetteer made significant contributions to Basic throughout the 80s. A few options for the XP system were added. For example:

Rules Cyclopedia (TSR1071, 1991) collected many of these and standardized the ad-hoc awards, establishing five sources of XP:

By this point it was clear that XP from sources other than killing monsters were the primary means of attaining higher levels, especially after the first few levels.

1e brought back a lot of Gygax's early ideas about adjusting monster XP by PC level:

Dividing the total adjusted hit dice equivalent of the monsters slain by the total of all levels of experience of all characters who had a part (even if only 1 missile, blow, spell, etc.) in the slaying yields a fraction which is the measure of challenge. If the numerator is greater than the denominator, then full experience should be awarded. If the denominator is greater, use the fraction to adjust the amount of experience by simple multiplication.

If the relative value of the monster(s) or guardian device fought equals or exceeds that of the party which took the treasure, experience is awarded on a 1 for 1 basis. If the guardian(s) was relatively weaker, award experience on a 5 g.p. to 4 x.P., 3 to 2, 2 to 1, 3 to 1, or even 4 or more to 1 basis according to the relative strengths.

Magic items were also worth XP, beginning a tradition of listing both XP value and GP value for magic items that would last into second edition.

Note: Players who balk at equating gold pieces to experience points should be gently but firmly reminded that in a game certain compromises must be made. While it is more "realistic" for clerics to study holy writings, pray, chant, practice self-discipline, etc. to gain experience, it would not make a playable game roll along. Similarly, fighters should be exercising, riding, smiting pelts, tilting at the lists, and engaging in weapons practice of various sorts to gain real expertise (experience); magic-users should be deciphering old scrolls, searching ancient tomes, experimenting alchemically, and so forth; while thieves should spend their off-hours honing their skills, "casing" various buildings, watching potential victims, and carefully planning their next "job". All very realistic but conducive to non-game boredom!

It would seem that the Gazetteer authors agreed with the Gygax's premise, but not the conclusion... 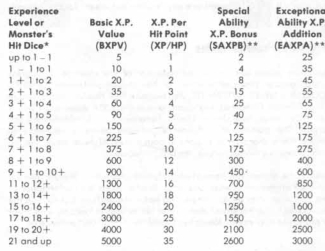 While there was no mention of roleplaying awards or bonuses for achieving goals, Gygax did suggest an optional special bonus of 1,000 xp for any PC that was slain but then raised from the dead.

On the subject of good roleplaying, though, Gygax added training time for advancing in level, and provided extensive rules on how to determine the number of weeks spent training, based on how well the PC performed the "natural functions" of their class, as well as acting in accordance with their alignment. Given that each week of training also cost 1500gp/level and "Poor showing with aberrant behavior" could quadruple the time spent, this was all stick, no carrot.

Additionally, Basic's "XP cap" was kept, but in a new awkward form: when a PC earned enough XP to gain the next level, they stopped earning more XP until they trained for that level. The rare DM that enforced that rule would be wise to also only award XP at the end of adventures, to avoid PCs taking a month of downtime between excursions to the plot dungeon.

Despite this minimal core system, module authors were happy to add other ad-hoc sources of XP:

By the time Second Edition was printed, many traditions from existing groups, tournament play, published modules and other games were collected and added to the rules.

A full page in the DMG suggests possible situation that warrant XP rewards, including awards for players making the game fun (and not being disruptive), PCs surviving, players improving their play style, and PC achieving story goals. These awards are nebulous and don't include XP values.

Now, with the exception of the Rogue, characters could expect to earn most of their XP from defeating monsters, taking specific in-class actions (presumably while defeating monsters) and nebulous ad-hoc XP bonuses.

3e changed everything about levels and XP. For starters, the XP required to gain a level was standardized across all classes at 1,000XP per current level above what you needed for your current level.

This is a drastic reduction from prior editions, which doubled total XP needed every level for most levels, then settled into 100,000xp or more per level after.

To compensate, XP calculations depend heavily on the PC's current level; one ogre (CR 3) against a party of four 1st-level PCs earns each of them 225xp (23% of level 2), while the same ogre against a party of four 5th-level PCs is only worth 188xp (4% of level 6). Furthermore, this causes lower-level party members to earn more XP and catch up to the average over time.

The DMG also provides three other means of earning XP without slaying (or defeating) monsters. It refers to these as "Story Awards".

However, there's an important note about these Story Awards; the DM is advised to either halve or remove the "Standard Awards" (that is, XP for defeating monsters) if Story Awards are used:

Don’t simply add story awards to standard awards (even if you compensate by giving out more treasure as well) unless you want to speed up character progression.

4e squashed the XP chart further; there's a complicated algorithm, but the short version is that each new level requires just a little more additional XP than the last one, and that extra amount doubles each half-tier.

XP for encounters is fixed, with a standard monster of a given level granting 1/10th the XP a PC of that same level needs for the next level. So a level 3 Ogre is always worth 150XP (assuming a "standard" Ogre) regardless of PC levels.

Non-combat encounters with risk (traps, puzzles, etc) are counted as monsters defeated based on the type of Skill Challenge they represent. Skill Challenges are treated as combats, complete with initiative, and consist of one or more party members rolling skill checks, trying to collect a set number of successes before collecting a set number of failures. Published modules treat these as encounters, just like monsters, and specify their XP rewards for success, as well as consequences for failure.

This did not help defend 4e from accusations of being a tabletop MMO.

5e modified the XP-per-level chart again, squishing the base significantly but bringing back a (somewhat) geometric progression similar to 3e's.

According to the DMG, this should work out to roughly one session (not adventure!) per level up to level 3, 2 sessions per level to level 4, and then 2-3 sessions per level thereafter. This is drastically faster than any prior edition, but is balanced by a slightly shallower power curve; 5th-level PCs are no longer superheroes when compared to 1st-level PCs as in any edition through 3.5.

Meanwhile, the XP-for-monsters works the same as 5e: monsters have pre-printed XP values, you add up the XP for the encounter and divide it among the PCs that participated.

Additional awards can be made at milestones throughout an adventure and at its end, treating minor milestones as "easy" encounters and major ones as "hard" (there's encounter-building rules explaining difficulty levels).

Ad-hoc awards for decision making or good roleplaying are notably absent; a clear design goal of rewarding XP for overcoming challenges was closely adhered to. Given the purported "three pillars" design goals of Socialization, Exploration and Combat, the XP reward system feels under-developed.

Only recent editions of the game have been motivated to focus, through XP rewards, primarily on killing stuff. Basic, 1e, 2e and to some extent 3e have codified (or even enforced) sources of XP other than killing monsters; from acquiring treasure to roleplaying to accomplishing goals, older editions rewarded non-combat play and intelligent problem solving, often to a much greater extent that defeating monsters.

After 3.5 (including 3.5 to some extent), winning combat encounters became the primary means of gaining levels.